This is probably the oddest question that I’ve ever been asked. The skinny: A stalker friend got bored and followed one of my archive.org links and found some of â€œMyMusicâ€ -

Well, a decade and change ago, I used to remix MODfiles to make them enjoyable for my several-hours-stuck-in-traffic job. This generally meant that I’d reuse sequences, and sometimes slow them down to keep from causing extra anxiety and just put me in a good mood.. keep in mind that I often spent nearly 2 hours in traffic each way, nearly every day. 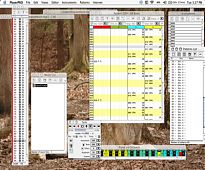 Enter â€œRedShiftâ€œ. This wasn’t my song- all I did was slow it down, change patterns, and add a bit of reverb. This is nothing new, and certainly wasn’t at the time- no I didn’t create Vaporwave. I’m just a lazy hack who made songs sound better to himself when trying not to get annoyed at the world.

For those curious, I’ve restored a non-archive.org version from one of my backup images, circa mid-2003 (of a tune from 1996 remixed in May, 2002), completely coincidentally, as I was looking for patches I made to software then for a reference. This is – Juice/phdsâ€™ RedShift (download link), remixed to be longer, slower, and with a little bit more ambiance.

No, this isn’t Vaporwave. I gotta say, though, for 20+ year old 8 bit samples, it still sounds pretty good on headphones. Thanks, Juice!

This post was primarily aimed towards the current â€œWorld Revolves Around Meâ€ YouTube vlogger style of media- it wasn’t intended to be taken seriously.